How much do Raul Hilberg and I owe you?

Dear Angela Merkel: How much do Raul Hilberg and I owe you? 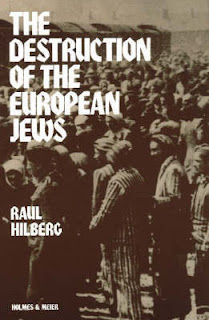 [Note: I will be interviewing Thomas Dalton, author ofDebating the Holocaust: A New Look at Both Sidesthis Saturday, April 24th, 5-6 pm Central, onAmericanFreedomRadio (to be archived here for free on-demand listening).  I am still looking for a mainstream Holocaust expert to refute him during the second hour. Over the past few months I have invited Deborah Lipstadt, Michael Shermer, John Zimmerman--the three most prominent critics of the "Holocaust deniers" -- as well as many dozens of professors from several of the leading Holocaust and Genocide Studies and Jewish Studies programs. While I have received a few cordial refusals, notably from Shermer and Lipstadt, the vast majority of the academic "experts" have refused to respond...as has anti-revisionist blogger Muehlenkamp. I will be publishing my email to these experts in a later blog. Meanwhile, I am worrying about how to fill the second hour of the show. If you know any Holocaust experts who dare to defend the conventional wisdom, please have them contact me: kbarrett*AT*merr.com. Otherwise I will just have to keep Dalton on for the second hour to respond to callers, many of whom, I hope, will critique his interpretations.  Anyway...as a free speech absolutist and a card-carrying non-coward, I am disgusted by the fear that surrounds this topic--not to mention the criminal sanctions. Below is my letter to German Chancellor Angela Merkel offering to turn myself in for beginning to doubt the standard six-million-Jewish-victim figure.]

I read in the news that your German government has fined Bishop Richard Williamson 10,000 Euros for "partial Holocaust denial."  According to reports, the 10,000 Euros fine reflects Williamson's public statement that he believes that "200,000 to 300,000 Jews died in Nazi concentration camps" rather than the widely touted figure of six million.

According to the dw-world.de report, you stated that the pope must "'clarify unambiguously that there can be no denying' that the Nazis killed six million Jews." So I am writing to tell you that as a Muslim and a nonbeliever in both papal infallibility and Zionist historiography, I am not going to endorse the six million figure even if the Pope threatens me with hellfire and damnation. After reading three books on the issue--Lipstadt's Denying the Holocaust, Shermer's Denying History, and Dalton's Debating the Holocaust--I am now prepared to state that I find pre-eminent Holocaust scholar Raul Hilberg's estimate of 5.1 million Jewish Holocaust victims a more reasonable estimate.

Since it is against the law in Germany to state ones belief that fewer than six million Jews died in the Holocaust, Hilberg and I are apparently partners in crime. The question is, precisely what penalties should Hilberg and I face? Since Bishop Williamson was fined 10,000 euros for underestimating the six-million-Holocaust by 5.75 million people, that means that underestimating the six-million-Holocaust by roughly one million, as Hilberg and I do, should be penalized by a fine of $1,739.13 Euros. Please let me know where I should go to turn myself in -- the nearest German consulate is in Chicago -- and whether you would like that in the form of cash, check, or credit card. Or should I just send it straight to Israel and bypass the middleman? (Hilberg, fortunately for him, passed away a couple of years ago, and will thus never have to feel the fiscal jackboot of German justice.)

But seriously, Ms. Merkel, you may ask why I side with Hilberg's estimate of 5.1 Holocaust deaths rather than the well-known figure of six million. My answer is that Thomas Dalton, in his book Debating the Holocaust, presents evidence that the figure of six million European Jewish victims threatened with destruction repeatedly occurs long before anyone could possibly have known the real figure. For example, the February 23rd, 1938 New York Times describes six million European Jews as "slowly dying of starvation, all hope gone." Yet at that time the Holocaust, much less its precise body count, was still several years away. A few decades earlier, the May 7, 1920 New York Times cited "Jewish war sufferers in Central and Eastern Europe, where six millions face horrifying conditions of famine, disease and death..."

These two cases are not isolated instances. All told, Dalton cites seven such references to the six million Jews threatened/killed figure during World War II but before accurate body counts were possible; two such references from the 1930s; eight from the period during and after World War I; five between 1900 and 1914; and even four from the 19th century, the first occurring in 1869! He also states that when the official death toll at Auschwitz was revised downward from 4 million to 1.1 million in 1989, the official consensus held that the previously-believed-in 2.9 million Holocaust victims who suddenly turned out never to have existed were all non-Jewish Poles, thus preserving the apparently magical six million Jewish victimsfigure...while the anti-revisionist Shermer, as I recall, claims that the overall Holocaust total didn't change, despite the sudden evaporation of 2.9 million previously assumed death camp victims, because about that number could be added to the previously-accepted figures for victims killed on the Eastern front, mainly by firing squads. Either way, it seems very strange that the well-known six million figure (and the less-known 11 million figure that includes non-Jewish victims) could survive the sudden disappearance of almost three million previously-assumed deaths.

The arguments cited above, along with others too lengthy to elaborate here, suggest that the magic figure of six million is some sort of tribal shibboleth, rather than an empirically-verified, historically-accurate body count. Hilberg's estimate of 5.1 million Jewish Holocaust deaths thus seems far more probable.

Honestly, Ms. Merkel, I do not understand why the six-million-Holocaust, if it is really a well-verified historical fact, needs to be protected by criminal prosecutions, fines, prison sentences, ad-hominem vilification, the destruction of careers and reputations, and all the other trappings of the Orwellian police state. Some African-Americans and Native Americans argue that their holocausts involved up to one hundred million deaths, while other historians claim that the real figures are only a small fraction of that...and yet I have never heard of anybody being fined, imprisoned, or driven out of polite society for the all-too-common "crime" of "underestimating" these holocausts by millions or even tens of millions. Why should underestimations of the Jewish body count from the Nazi Holocaust be treated differently? Isn't this a case of racist double-standards, in which the "inferior races" (Native Americans and Africans) are neglected, while superior "white" Jewish suffering is lionized? And isn't it the case that if denying the Palestinian holocaust, the Nakba, were criminalized, virtually the entire population of the USA, Europe, and Israel would have to be prosecuted?

Truth does not need the support of criminal sanctions, Ms. Merkel. By prosecuting Holocaust revisionists for thoughtcrime, you are announcing that you believe they are right. That makes you a Holocaust revisionist yourself. Please turn yourself in to your nearest Gestapo Thoughtcrime unit immediately. Who knows, maybe you'll end up sharing a cell with me and the ghost of Raul Hilberg.
Posted by Kevin Barrett at 7:07 PM

Very good. Except I think Richard Williamson is closer to the actual figure, and I think Merkel's first name is Angela.

Well I'm a British Christian & I'm certainly not going to pay homage to the holocaust myth. Sure hundreds of thousand of Jews died but the whole matter pales into insignificance when compared to the part paid by Jews in running the Soviet Gulags which caused the death of between 30 & 50 million Christians & Muslims. A matter just hinted at on this Jewish website. http://www.ynetnews.com/articles/0,7340,L-3342999,00.html

5.1 million PEOPLE may have perished in German camps but it couldn't have been just Jews alone! According to the World Almanac's for the years of 1939-1945 total Jewish population numbers only decreased by around 400,000. How the census' were taken during this time, I don't know but there wasn't even 6 million Jews in all German held territories during the war so that number is an impossibility!

Pleas take your time, and watch "ontehtirdofaholocaust" on the web. It´s the "blockbuster movie" of revisionism...