If you want better photos, go to http://www.flickr.com/photos/freegaza. You'll see her much more spiffy, photos of us, photos of naming her. You can use any of those that you like. Love Greta

London – 14 May 2010 – At 22:45 local time tonight, the MV Rachel Corrie, a 1200-ton cargo ship, part of the eight-vessel Freedom Flotilla, set sail from Ireland on its way to the Mediterranean Sea.  Three, ships from Turkey and Greece will join her, then sail to Gaza.
This past week reports from [...]

Debbie Menon
http://mycatbirdseat.com/
http://www.intifada-palestine.com!!
"Shaking off" is the literal translation of: Intifada

Fiddler on the roof - If I were a rich man ...
http://www.youtube.com/watch?v=RBHZFYpQ6nc
Obama Administration: Goldman Sachs from Top to Bottom
Kurt Nimmo, Infowars
May 15, 2010
Two articles on the FDL website detail the intimate and incestuous relationship between the Barry Obama administration and Goldman Sachs. FDL names names and provides expansive detail on the Goldie administration. Photo: Lloyd Blankfein, Goldman Sachs CEO: the man who may as well be president.
"At a time when Congressional hearings are set to call testimony from some Goldman Sachs employees, it is vital to understand how widespread that institution's ties are to the Obama administration. This diary shows the pervasive influence of Goldman Sachs and Goldman created institutions (like the Hamilton Project embedded in the Brookings Institution), employees and influence peddlers in the Obama administration," FDL wrote on April 27.
It is not simply Larry Summers, Timothy Geithner, Rahm Emanuel, Gary Gensler and Mark Patterson who are Goldies, but a long list of others. "But that's just the tip of the Goldman Sachs iceberg. Here you will find, I believe, the most comprehensive list of people-groups yet available to show how Obama's administration has really become the Goldman Sachs administration."
Elena Kagan is merely the latest addition, although her ties to Goldman are downplayed if not completely ignored by the corporate media.
FDL notes that the "Obama administration is not the first administration that Goldman has infiltrated, although it is perhaps the one that has been most completely co-opted from top to bottom. Recall that former Secretary of the Treasury Paulson in the George W. Bush era came from — Goldman Sachs where he was its chief. Recall too that the brilliant, late economist John K. Galbraith has written an entire chapter of a book devoted to the Great Depression and the economic collapse of Wall St. that accompanied it to the role of Goldman Sachs."
Goldman had sponsored trusts such as Blue Ridge and Shenandoah, speculative Ponzi schemes that made the market collapse of October 1929 possible. Goldman and others "whip(ped) up a speculative fever in shares, reaping (highly leveraged) capital gains with other people's money." They were fraudulent pyramid schemes, a "Charles Ponzi-Bernie Madoff scam," writes L. Randall Wray.
It was not mere greed and short sightedness that created the Great Depression. "To think that the scientifically engineered Crash of '29 was an accident or the result of stupidity defies all logic. The international bankers who promoted the inflationary policies and pushed the propaganda which pumped up the stock market represented too many generations of accumulated expertise to have blundered into 'the great depression,'" writes the late Gary Allen.
"The international bankers sought to bring about a condition of despair here so that they might emerge as the rulers of us all," lamented Congressman Louis McFadden, Chairman of the House Banking and Currency Committee at the time.
Goldman is now strategically placed in the White House as the Greatest Depression inexplicably unfolds all around us. McFadden was on the right track — the banksters are positioned to emerge as rulers of us all… and most of us, thanks to the corporate media, are completely unaware.
Here are the FDL articles: A List of Goldman Sachs People in the Obama Government: Names Attached to the Giant Squid's Tentacles and An Updated List of Goldman Sachs Ties to the Obama Government Including Elena Kagan.
http://www.infowars.com/obama-administration-goldman-sachs-from-top-to-bottom/

Posted by Michael Santomauro at 6:31 PM No comments: Links to this post

Brief memo from my iPad:
__._,_.___
Reply to sender | Reply to group | Reply via web post | Start a New Topic
Messages in this topic (1)
Recent Activity:
Visit Your Group
MARKETPLACE

The White House allowed BP to hide its video feed of a gushing oil pipe in the Gulf of Mexico from the public for three weeks, all the while that same video played live in the White House Situation Room, ABC reports.

This startling revelation comes just as Obama prepares to get really angry in public about the spill – just in time to cover up his administration's collusion with BP to hide the true extent of the massive disaster in the Gulf.

Brian Ross and John Soloman of the Center for Public Integrity discussed ABC's quest to obtain the video of the oil pipe and revealed that the White House consented to the release of a 30 second clip of the pipe.

"At the end of the day, the White House finally acquiesced to the 30 second piece because they understood the political and media pressure," said CPI's John Soloman. "Why not sooner? It's been going on for three weeks. People have seen this internally within government almost every day. Why can't the American people see it?"

The release of even the 30 second video clip showing the oil spewing uninhibited into the ocean immediately led outside observers to conclude the disaster was far worse than the 210,000 gallon estimate of the NOAA and Coast Guard. One scientist predicted to NPR that the rate is more in the range of almost 3 million gallons a day based on an analysis of the video released by BP.

The revelation that the White House and BP kept the true extent of the oil disaster from the public coincides nicely with last night's news that Obama plans to get "angry" in front of the White House press corps tomorrow about BP's role in the disaster and its clean up. Don't be fooled, though. The evidence is mounting that the White House is working in concert with industry to hide the truth about the extent and cause of the spill.

CNN interviewed a marine toxicologist, Riki Ott, who said:
The oil will bio-accumulate, meaning the oil will accumulate throughout the entire food chain.....the dispersants won't sink to the bottom...instead, they will travel in the water column.....where's BP evidence that their dispersants aren't toxic? The EPA approved the dispersants BP is using; HOWEVER, the EPA is requiring only VERY OLD MINIMAL TESTS for these dispersants.
Riki Ott says this is a severe toxic hit in the water column harming marine wildlife for decades to come.

Here's what you're not hearing from BP: it will take decades to get rid of the oil in the Gulf spill. The health consequences for residents of the coast will be severe and long-lasting—and even more acute for cleanup workers directly exposed to the oil. And the marine wildlife may never fully recover.

In this clip from Anderson Cooper 360 (via Crooks and Liars), marine toxicologist Riki Ott (Not One Drop: Betrayal and Courage in the Wake of the Exxon Valdez Oil Spill) and presidential historian Douglas Brinkley explain some of the ecological and economic consequences of this latest man-made environmental disaster.

COOPER: Joining me now is Riki Ott, who is a marine toxicologist with the Earth Island Institute, also presidential historian Douglas Brinkley — Brinkley.

Riki, Rush Limbaugh and Gene Taylor say this is just going to break up naturally. A, is that true? And, B, does it mean we should just let nature take its course?

COOPER: All right. So, leaving it to nature take its course clearly doesn't make any sense. 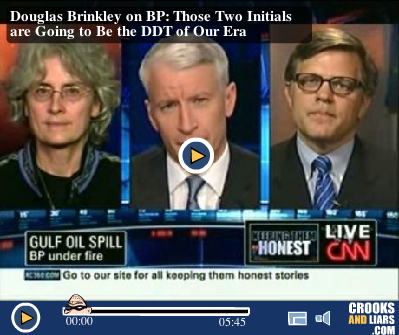 THE TWO FACES OF McCARTHYISM

If I moderate comments and do not allow the zionist point of view to appear on my Blog, I am accused of being a McCarthyite.
If zionists attempt to silence any criticism against Israel, they are called defenders of democracy.
It seems that McCarthyism has two faces, the old and the NEW.

In a letter sent to US officials, Neal Sher, a former executive director of the American Israel Public Affairs Committee, said that recently disclosed information about Goldstone's apartheid-era rulings raised questions about whether he was eligible to enter the United States. The letter was sent to US Secretary of State Hillary Clinton, US Attorney-General Eric Holder and Homeland Security Secretary Janet Napolitano. Attorney seeks to bar Goldstone from US

NEW YORK – A well-known American Jewish attorney who worked to deport former Nazis from the US is urging American officials to bar former judge Richard Goldstone from entering the country over his rulings during South Africa's apartheid regime.

In a letter sent to US officials, Neal Sher, a former executive director of the American Israel Public Affairs Committee, said that recently disclosed information about Goldstone's apartheid-era rulings raised questions about whether he was eligible to enter the United States. The letter was sent to US Secretary of State Hillary Clinton, US Attorney-General Eric Holder and Homeland Security Secretary Janet Napolitano.

Individuals who admit to acts that constitute a crime of moral turpitude¨are ineligible to enter the US, Sher charged. The recent public revelations, to which Goldstone has reportedly admitted, would appear to fit within this provision. At a minimum, there is ample basis for federal authorities to initiate an investigation into this matter, Sher said.

Goldstone, the author of a report accusing Israel of war crimes during Operation Cast Lead, sat as a judge in South Africa during the apartheid regime. He has faced recent charges that he sent 28 black South Africans to their deaths. Goldstone has defended his rulings, saying he was part of the system and had to respect the laws of the land at the time, including enforcing laws he opposed.

In his judicial position, according to Sher, Goldstone was instrumental in effectuating and legitimizing a regime universally known for its widespread human rights abuses.

Sher, formerly director of the Justice Department's Office of Special Investigations, was instrumental in deporting dozens of Nazi war criminals. He played a major role in placing Austrian president Kurt Waldheim on a watch list of people ineligible to enter the US.

Sher had his own brush with trouble later, when he was investigated for misappropriating funds from the International Commission on Holocaust Era Insurance Claims.