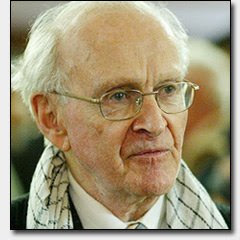 In a recent e-mail release, the American Michael Santomauro(ReporterNotebook@gmail.com) informed us that the revisionist Horst Mahler, during his criminal trial in Munich in January 2009, had, directly quoting me, begun his opening statement with my evocation of the martial prowess of the American-Zionist axis:

H. Mahler was convicted and sentenced to nearly thirteen years' imprisonment. He is now aged 74. At her end, his friend and colleague Sylvia Stolz, "the German Joan of Arc", has been found guilty and sentenced to over three years in prison for having, while defending Ernst Zündel in court, argued without at all hiding her own revisionist convictions. She is 46 years old. For the same reason a good number of other revisionists before them had been sent to prison by the German or Austrian justice system. It was at Berlin's initiative that E. Zündel, recently released, had to spend seven years in American, Canadian and German cells. In Austria, several revisionists are still incarcerated, amongst whom Wolfgang Fröhlich and Gerd Honsik. That is where Germany and Austria stand these days. With the exception of an especially heroic minority of their sons and daughters, they seem to submit tothe law of their conquerors, who – as is too often forgotten – have still not, after 65 years, considered signing a peace treaty with Germany.Equipped with its "nuclear shields", its "security fences" and, above all, its supreme weapon, the Great Lie of "the Holocaust", the American-Zionist axis intends to lay down its law to the rest of the world. But nothing long-lasting is ever built in such a way – on threats, fear and deception. To begin with, the Great Lie of "the Holocaust", thanks mainly to the Internet, sees itself being challenged more and more. It has, of course, spawned a religion and, on that level, there are still fair days ahead for it, but on the level of historical knowledge it has, ever so quietly, passed away. In any case I shall soon be demonstrating as much in a text dealing with the death, at last, of the Nazi gas chambers, on the historical and scientific level.

(65th anniversary of an unconditional surrender)

GI ordered to leave children behind

GI ordered to leave children behind
Mon, 03 May 2010 17:16:57 GMT
A US soldier who tried to help injured Iraqi civilians after a US apache strike says his superior ordered him not to tend to the injured children on the scene.

Ethan McCord, a US infantry soldier, was one of the six troopers who were dispatched to the scene after the apache helicopters killed a dozen people, including two Reuters staff, in Baghdad.

"When I came on the scene I saw the bodies, I could hear a child crying, so the crying was coming from the van so I immediately went up to the van and when I looked inside I saw a girl who's about three years of age, she had a belly wound, and glass in her eyes and in her hair," McCord told Press TV in an exclusive interview on Sunday.

"The team leader who was standing there told me I needed to stop worrying about these motherfucking kids," said McCord, a father of two.

The July 2007 incident was captured by the US military. The classified video was acquired by WikiLeaks through military whistleblowers.

The group released the video which showed an aerial view of a group of men moving about a square in a Baghdad neighborhood before being targeted by the apache chopper.

McCord says he is struggling with mental problems dealing with the "real destruction," after he consulted military for assistance.

The psychiatrist "told me I needed to suck it up, … and to be a soldier and he told me that there would be repercussions," McCord said. "Right now we have a large number of suicides taking place in the US among military personal or recently returned vets from Iraq and Afghanistan."

He also noted that he has been trying to talk to local media in the US to tell the story, but "nobody wanted to listen; nobody wanted to hear about anything."
http://www.presstv.ir/detail.aspx?id=125325&sectionid=3510203
__._,_.___
Reply to sender | Reply to group | Reply via web post | Start a New Topic
Messages in this topic (1)
Recent Activity:
Visit Your Group