Posted by Michael Santomauro at 10:26 PM No comments: Links to this post

Posted by Michael Santomauro at 9:59 PM No comments: Links to this post

Posted by Michael Santomauro at 9:36 PM No comments: Links to this post

Prosecutors: Peter Senese Conned Parents Of Abduction Children « CBS New York
Posted by Michael Santomauro at 10:43 AM No comments: Links to this post

Should Holocaust lying be a crime?

Should Holocaust lying be a crime?

Filed under:  Dachau, Germany, Holocaust, TV shows, World War II — Tags: Dachau, Elie Wiesel, Holocaust lies, Irene Zisblatt — furtherglory @ 6:39 am
As most people know, Holocaust denial is a crime, punishable by 5 years in prison, but up to 20 years in prison in Austria.  Gerd Honsik was recently  sentenced to 5 years in prison in Austria for saying that there were no gas chambers in Germany, including Mauthausen and Dachau.  You can read about him here.
What about fake Holocaust survivors who tell outrageous lies in the books they write, such as the book entitled A Memoir of the Holocaust Years by Misha Defonseca who wrote a fake story about her escape, when she was four years old, from the Warsaw ghetto. Misha claimed that she was adopted by wolves, but was outed by the New York Times in an article that you can read here.
What about Herman Rosenblat who allegedly survived by eating apples thrown over the fence by a nine-year-old girl, in a sub-camp of Buchenwald; you can read about that story here.
I’m not talking about mistakes which are made about the Holocaust, like mixing up Rudolf Hoess, the Auschwitz Commandant,  and Rudolf Hess, Hitler’s deputy, who flew solo to the UK to try to make peace with the  British during WW II. The biggest mistake I’ve ever heard was when Alan Colmes said on TV that “gas ovens” were used in the concentration camps to kill the Jews.
On the old Hannity and Colmes TV show on 12/13/06, Alan Colmes showed a photo  of two cremation ovens at Buchenwald with the remains of partially burned bodies visible, as he said: “A number of people at this conference and your organization have said things like ‘The gas chambers did not exist.’ I want to put up on the screen the furnaces that were used to kill Jews.” 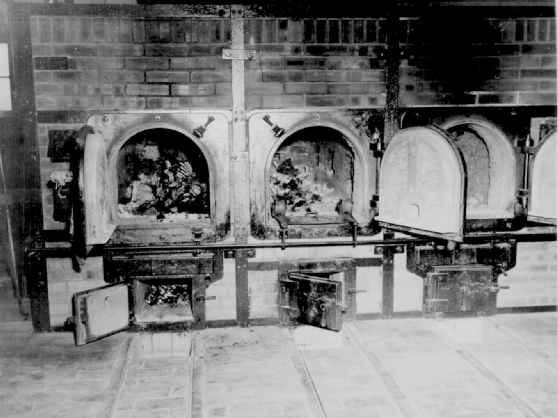 Cremation ovens at Buchenwald were not “gas ovens” for killing Jews
I wouldn’t put Colmes in prison for 5 years for saying that the Nazis killed Jews in gas ovens and I wouldn’t put Sean Hannity in prison for confusing Hoess and Hess in one of his books.  But what about Holocaust survivor Irene Zisblatt who told a lie about swallowing diamonds at Auschwitz?  You can read about her here.
Several years ago, the book entitled Fragments: Memories of a Childhood by Binjamin Wilkomirski was exposed as a fake account of the author’s alleged stay in the Majdanek concentration camp and other camps.  After Wilkomirski admitted writing a fake memoir, the book was not withdrawn from the list of books that students in America were assigned to read; it was merely reclassified as a novel.
Another novel that is similar to Wilkomirski’s book is The Painted Bird by Jerzy Kosinski, a Polish writer whom I first learned about on my visit to Poland in 1998.  His book was published in America in 1965; it is routinely assigned to American college students to read, although the stories that he wrote were made up, according to my Polish tour guide.
If a person deliberately tells a lie for the purpose of making money off a book and public speeches, shouldn’t that be a crime?  Shouldn’t such a person be put into prison?  Maybe not for 5 years, like Holocaust deniers, but for 90 days, like Lindsay Lohan.  I would even allow a statute of limitations on Holocaust lies that would save  Elie Wiesel from 90 days in jail, although there is no statue of limitations for Nazi war crimes. You can read about Elie Wiesel here.

https://furtherglory.wordpress.com/2010/07/22/should-holocaust-lying-be-a-crime/
Posted by Michael Santomauro at 7:31 AM No comments: Links to this post