Merrill Lynch, Trading Against the Deck

Merrill Lynch, Trading Against the Deck

By: Admin
Merrill Lynch, Trading Against the Deck
Posted by Jeff Carter
on January 26th, 2011

Jeffrey Carter is an Independent Speculator. He has been trading since 1988. He is a former member of the CME Board of Directors. He currently does commentary on markets for CNBC, Fox Business, Bloomberg Television, CNN International, Canadian News Network, Bloomberg Radio, WTTW, WBEZ-FM, WGN, CBS Chicago and CBS News. (More)


No one is talking about this except pro traders today. Full disclosure, Pro traders are more paranoid than the worst schizophrenic. The left thinks that Glenn Beck spins conspiracy theories. I laugh in their general direction. Spend some time on a trading floor and you will hear some whoppers.

Unfortunately, an old saw is turning out to be true.

Merrill Lynch was caught with its hand in the cookie jar. Their prop desk was trading in front of, around and against customer orders. The Wall Street Journal had the story this morning.

On trading floors, we used to call it front running, bucketing, or trading against the deck. Stealing. When a broker engaged in that sort of unethical practice, they made a risk free profit. Some made millions. If they could cajole a couple of bagmen in to the scheme, they could steal more, and eliminate their errors.

To be clear, not all floor brokers were like this, but there were enough that the CME banned dual trading in the 1990′s. But, virtually everyone on the floor suspected that the prop shops off the floor consistently traded against and in front of order flow. Too many coincidences. Hopefully, regular readers of this blog that once patrolled a trading floor can enlighten the public with some stories in the comments section.

But, this whole "industry standard" gets worse. Recall that Goldman Sachs ($GS) didn't lose money for entire quarters. Morgan Stanley ($MS) would lose on only four days in a quarter. Today, it was reported that equity options volume was being traded in dark pools. CBOE chief Bill Brodsky has spoken out. Kudos to Mr. Brodsky and it would be nice if the chairman of the other public exchanges would speak out as well. Fragmentation is killing the market. At the end of the day, the public will be a huge loser.

If one looks at foreign exchange, muni bond and corporate bond markets, there is little if any price and quantity transparency. The banks keep a stranglehold over supply and it's impossible and inefficient to get a quote. Don Cummings runs a muni bond advisory firm at Blue Haven Capital and explained to me how the muni market works once. Trust me, it's not a level playing field and they get you coming and going. "Haircut" is the polite term for it. Guess that's why I am bald. (Blue Haven left a comment; it is centralized trading and clearing that he wants)

This is one of the things that ruin consumer confidence in free markets. When they are rigged so an elite few can make money risk free, the public runs away. Unfortunately, the SEC has written rules and regulations to support the under the table activity of the big shots. They can point to the law and regulation and shrug their shoulders.

An old friend of mine who works as a lawyer now says that there are several lawsuits pending to try and level various playing fields. From computerized trading systems to the structures of the market. I don't hold out a lot of hope for those legal actions. But, traders are smart enough to know the market is slanted against them. That's the way many markets are today. Only public outcry will cause regulators to change them.
http://www.progressivepeoplepower.com/index.php?itemid=68#more
__._,_.___
Reply to sender | Reply to group | Reply via web post | Start a New Topic
Messages in this topic (1)
Recent Activity:
Visit Your Group

BREAKING: All Communications Cut to 1.7 Million in Gaza, Including Mobile, Landline and Internet

(JTA) -- Sweden's Queen Silvia says an investigation into her father's links to the Nazis show that he is a hero.

A report commissioned by the queen determined that Walter Sommerlath helped at least one Jewish man escape the Nazis. The 34-page report was released on Tuesday.

Sommerlath exchanged his coffee plantation in Brazil for the Berlin factory of Efim Wechsler in 1939, which allowed Wechsler to immigrate to Brazil and escape the Nazis, according to the report.

The report also found that Sommerlath was a member of the Nazi Party, but apparently inactive.

Elan Steinberg, vice president of the American Gathering of Holocaust Survivors and their Descendants, called the report "self-serving and lacking in credibility," and said that Holocaust survivors reject it.

"The report was not an independent inquiry -- it was commissioned by the queen with the participation of her cousin, a Brazilian lawyer. Such a probe can only raise suspicions of a whitewash," Steinberg said in a statement. "The truth demands an objective and independent investigative process. What Queen Silvia has produced only raises further troubling questions."

Silvia Sommerlath met Carl XVI Gustaf, who became the king of Sweden, at the 1972 Munich Olympics, where she was working as an interpreter. They married in 1976.

A Swedish television station aired an investigation last November into Walter Sommerlath's alleged Nazi past, reporting that he took over a Jewish-owned German factory in 1939 as part of a Nazi program of Aryanization. The queen issued a denial following the report, saying her father joined the Nazi Party to save his career.

By: Admin
THE BEAST
http://www.progressivepeoplepower.com/index.php?blogid=5
__._,_.___
Reply to sender | Reply to group | Reply via web post | Start a New Topic
Messages in this topic (1)
Recent Activity:
Visit Your Group

----- Original Message -----
From: Denver Media Service
To: rachel@msnbc.com
Sent: Tuesday, August 09, 2011 6:05 PM
Subject: Rachel, get off your ass and investigate/report this story/reality/crimewave!

By: Admin
THE BEAST
By Nick Guarino


The most evil, fiendish machine of destruction ever created has been turned on. I call it The Beast.

The Beast is not an atomic bomb. It isn't a missile or a deadly submarine with enough nukes to end life as we know it.

It is a computer. The fastest, most powerful ever made. Goldman Sachs owns and runs it. It is stealing your wealth day and night.

The Beast is so secret only a handful of people have actually seen it. The picture above is an educated guess of what it looks like. I based it on talks I've had with people who know some of the components of this market manipulation system from hell.

No one understands everything The Beast does. We do know it is connected, directly or indirectly, to every information system known to man. Every database. It is so fast, it runs circles around every other computer in the world. It has the power to manipulate (for a time) every market in the world.

Soon this system, or one like it, could be used to control most every aspect of your life.

Right now it is most...
Read More »
http://www.progressivepeoplepower.com/index.php?blogid=5
__._,_.___
Reply to sender | Reply to group | Reply via web post | Start a New Topic
Messages in this topic (1)
Recent Activity:
Visit Your Group

Class Warfare In America
The Effort To Dominate The Middle Class
NewsFocus, by Tim Watts - 111410

Under the Bush II tax cuts for the wealthy, the richest 400 Americans doubled their personal wealth, while at the same time cutting their tax rate in half. 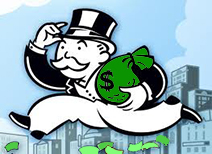 In case you haven't noticed, there is a growing sentiment among a great many in this country, questioning the devastating economic collapse and how it is that so many incredibly intelligent people from the Federal Reserve, the central banks, the Wall Street financial sector, and the government, all failed to see this giant economic tsunami coming. With all of its close ties with the US government, you would think that the vaunted brain-trust of Goldman Sachs would have seen this coming. Well, perhaps I should maybe rephrase that a little... you would have hoped that Goldman Sachs and the other megalithic titans of the financial sector would have warned the government. By their own admission, they excel at the business of recognizing financial trends, yet we're expected to believe that these self-professed money masters didn't see this coming, until it was too late. ... (Read More)

MONOPOLY MAN WITH THE MOUSTACHE, TOPHAT AND CIGAR

THE ORIGINAL "CAPITALIST" MONOPOLY BOARD GAME PIECE WAS MODELED AFTER J.P. MORGAN

THE MONOPOLY MAN WITH THE MOUSTACHE, TOPHAT AND CIGAR

In 1910, New Yorker J.P. MORGAN sat around a mansion on Jeckyl Island (off the coast of Georgia) with six other men who owned approx. one-quarter of the world's wealth and devised the "FEDERAL RESERVE BANKING SYSTEM." They met in secret to create the Federal Reserve............(read more and see the video)
http://www.progressivepeoplepower.com/index.php?itemid=57
__._,_.___
Reply to sender | Reply to group | Reply via web post | Start a New Topic
Messages in this topic (1)
Recent Activity:
Visit Your Group

Here's the Abolish the Fed Blog:

Here's the Abolish the Fed Blog:
http://www.progressivepeoplepower.com/index.php?blogid=25
__._,_.___
Reply to sender | Reply to group | Reply via web post | Start a New Topic
Messages in this topic (1)
Recent Activity:
Visit Your Group
MARKETPLACE
From a bad 598 to 830 best, where's your score? freecreditscore.com.

By: Admin
THE FEDERAL RESERVE NEEDS TO BE ABOLISHED - IT IS A CARTEL OPERATING AGAINST WE THE PEOPLE;
THE FED DOESN'T NEED TO BE AUDITED - IT NEEDS TO BE ABOLISHED!
WHY?
1. IT IS INCAPABLE OF ACHIEVING ITS STATED OBJECTIVES;
2. IT IS A CARTEL OPERATING AGAINST WE THE PEOPLE;
3. IT IS THE SUPREME INSTRUMENT OF USURY;
4. IT GENERATES OUR MOST UNFAIR TAX;
5. IT ENCOURAGES WAR;
6. IT DESTABILIZES OUR ECONOMY;
7. IT IS AN INSTRUMENT OF TOTALITARIANISM!
__._,_.___
Reply to sender | Reply to group | Reply via web post | Start a New Topic
Messages in this topic (1)
Recent Activity:
Visit Your Group
MARKETPLACE
Know your score. Know what your credit strengths are. freecreditscore.com .