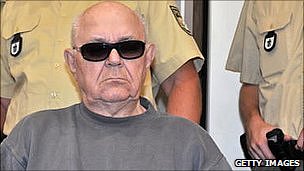 I cannot understand the double standard of the media and a good portion of the American public with regard to Jared Loughner's shooting rampage.  By all accounts the Congresswoman, Gabrielle Giffords,  seems to have been targeted because of Loughner's political views. The United States and Israeli governments routinely commit these types of murders against their political opponents throughout the Middle East and there is little if any condemnation on the part of media pundits or the public at large. Often these state sponsored acts of violence are accompanied by a large amount of so-called collateral damage which often but not exclusively consists of the targets immediate family e.g. wife, parents, children etc. Perhaps if Loughner had dropped a thousand pound bomb on the apartment house where Giffords lived or fired a missile from a drone at his target the public would be more sympathetic to his actions.
giuseppe furioso
--

Yes, I Can Dare to Dream in My Gaza

Rana Shubair: Yes, I Can Dare to Dream in My Gaza

Although I'm not a fervent advocate of using technology in every aspect of our lives, I have chosen to open my laptop and type this piece instead of writing it in  my notebook first, just for a change, and may be to please my ears with the clicking sound of my fingers striking the keyboard. I guess this shows that I'm in continuous pursuit for change even in the tiny aspects of life. Change; something referred to as being healthy nowadays is, by all means, a vital part of life for all those living in the tremendously stressful life of the 21st Century.

Palestinian Memorial Week for Palestine to begin in London

Muhannad is a Palestinian artist who resides in Alazzeh refugee camp in occupied Palestine. However, he originates from the southern Palestinian village of Biet Jibrin, which has been ethnically cleansed by the Israeli Zionist troops in 1948. "Don't beautify the Apartheid wall", a quote by Alazzeh for an interview on the role of Palestinian and international artists and his views on the segregation wall built around the West Bank. Al Azzeh was born in September of 1981 to Othman Alazzeh, an Arabic literature teacher and Amal Alazzeh.

Since he's shown an interest in Art and painting at the age of 10, his parents got him to participate in 'Alwan' (meaning colours in Arabic) workshop in Jerusalem, where he learnt and developed his talent at a young age and then published some of his work at the workshop's magazine.

In year 2003 Muhannad started his studies at Abu Dis University in occupied Palestine doing a BA in fine Art. However, before completing his first year, Alazzeh was arrested from his home by Israeli Occupation Forces for allegations of in-campus 'student activism'.  Although this period of his life remains a tough one, yet the experience has not put him down but enriched his artistic talent and made him more determent to express and utilise his ability for the benefit of the people of Palestine.

His most recent participation in an exhibition entitled "Not Politics" was about his 3-year time in Israeli jails. The work, which he referred to as "April the 15th" (the day he was arrested) included some abstract paintings representing life outside the jail as seen from the inside. "A cell's window was the only hope left, through its bars you could glimpse the ray?

A UK  exhibition is due in March  (5th- 13th, Israeli Apartheid Week) at the  Duke of York Picture House, Brighton.

As Matt Parrott noted in a comment on my previous blog,

We're not the ones who brought up Judaism. It's the media that, with absolutely no evidence whatsoever, dreamed up the notion that Giffords was assassinated by an anti-Semitic White Nationalist. When we speculated that Loughner might be Jewish, we did so based on a solid lead from an interview in Mother Jones of his closest friend. It was very relevant, as his being Jewish would have disabled the media's unprovoked attack on us.

Exactly right. I am certainly not wedded to the idea that Loughner was Jewish on his mother's side. That's why I had a question mark in the title of my blog.

JTA now has a blog by Ron Kampeas that goes through most of the genealogy, concluding with the suggestion that Loughner's mother's grandfather may have been Jewish. (In a previous blog, Kampeas had dismissed the Jewish connection because Totman is "an old English name." By that logic, Jon Stewart couldn't be Jewish because he has  an old Scottish name.) In his most recent comments, Kampeas speculates that Loughner's mother

might have mentioned her Jewish grandfather, beloved enough to live on in her brother's name, with pride or interest. Under those circumstances Loughner, who sought "chaos" according to Tierney, might have sought to provoke his mother and his uncle by pretending to admire (or actually admiring) Adolph Hitler. He might have told Tierney that his mother was Jewish as a shorthand, or might have seen her as Jewish — like I said, not the most reliable reporter. Or he might have explained the lineage, and Tierney might understandably have conflated it as "mother Jewish."

Pretty speculative but helpful in any case.  As we wait for a definitive account, the LATimes published an article ("Experts see echoes of extremism in Loughner's ramblings") that shows that efforts to blame the "extreme right" continue unabated.  The article quotes the $PLC's notorious Mark Potok as an "expert." Even after everyone with a brain is chalking it up to insanity, Potok writes, "I think you can find clues to some of the ideas that have influenced him, and I think many of them are clearly coming from the extreme right."

Never waste an opportunity to vilify the right.