The heroic French revisionist Georges Theil, a true FIGHTER, sent me in his native French language a piece of ironic humor whose ideas largely inspired my article below.
.

Georges Theil -- sentenced to six months in prison and a ONE HUNDRED THOUSAND EURO FINE for refusing to accept the government's public Holocaust religion -- the ludicrous dogma of six million martyred, angelic Jews gassed by wicked German devils. (More details: http://www.tellingfilms.netne.net/theil1231.htm)
.
* * *
.
We have all read about the pilfering of the metal sign "Arbeit Macht Frei" over the main gate at Auschwitz, and this gave me the idea for this text, which is timely in this period of Father Christmas ...

Here is the same sign at the very first German concentration camp, Dachau, near Munich, Bavaria. Actually, it was the British government that invented the phrase "concentration camp," not the Germans. In fact, over ten thousand white Afrikaner women and children died in British "concentration camps" during the Second Boer War (1899-1902) at the hands of Lord Kitchener, in true starvation death camps, not merely places to 'concentrate' enemy civilians. London had declared aggressive war on the Afrikaner whites at the orders of its masters, the Jewish Rothschilds and Oppenheimers -- after gold was discovered on Boer lands in what is now northern South Africa (near Johannesburg), but back then had been a free, independent, white Boer republic. Thus the first death camps were built by London to kill enemies of the Jews -- enemies of their infinite greed for power, diamonds and gold.
.

Saint Holoclaus is a no-good thief! We just learned that the metal structure "Arbeit macht frei" ("Liberation through Work") above the portal of the main camp of Auschwitz was stolen two days ago, under the blind eye - in the dark at 4 o'clock in the morning - of a surveillance camera ...

The question immediately arises of the motive for this act. In effect this object is not resellable; we cannot imagine anyone buying and reselling the world's most famous sign....
.
One might think there is nothing else at Auschwitz worth stealing, just old barracks..

But you'd be wrong: Three valuable items were stolen before this big sign!

-- 1) the "gas chambers"! They, for example, were stolen decades ago, and Frantisek Piper, director of the Auschwitz Museum, admitted in 1992 to the courageous young Jewish researcher David Cole (wearing his yarmulke cap) that the Soviets had built the "gas chamber" now displayed to the weepy tourists.....

Brave Jewish truthseeker David Cole shaking hands with the German-Canadian researcher Ernst Zundel, kidnapped from Tennessee by federal forces in 2003 and now serving a FIVE YEAR PRISON SENTENCE -- for his OPINIONS about the Holocaust -- in a German prison!
.

At the Auschwitz I subcamp, of course this Soviet-rebuilt chamber could not really kill anyone en masse. Mrs. Oleska of the Auschwitz museum stated coolly in 1995: "I know ... They [the Soviets] did not have time ... We will see later."
.
Yet there is another "gas chamber" at the Auschwitz subcamp called "Birkenau." Alas, it too was stolen! All you will find now is a morgue. A crematory oven is not a gas chamber.....every American city has one.
.
2) Worse, the thieves have also stolen, as Dr. Frederick Toben proved, the very ceiling holes where the SS poured in the Zyklon-B, the  grains of flea-killing insecticide!
.
Brilliant --they stole the Zyklon holes!
.

Dr. Fredrick Toben, an Australian expert on Auschwitz (shown here explaining a model of Birkenau) who just finished a three-month jail sentence for doubting the Holocaust religion, found slabs of concrete roof that were claimed to be the remnants of the actual German gas chambers. but there were NO holes anywhere in these intact huge roof slabs to drop in the Zyklon-B!
.
3) Then they also scraped off the blue Zyklon cyanide residue that bonded deeply into the walls of the gas chambers (a powerful substance, colored "Prussian blue," that even sometimes passed right through the walls to the other side!) Yes, the thick traces of cyanide that always bond to the walls of any real gas chamber were also made off with in the middle of the night.
Professor Robert Faurisson (University of Lyons II), expert on documents and former lecturer at the Sorbonne:

[Zyklon-B] is used for the disinfection of ships, silos and dwellings as well as for the destruction of pests. It is still manufactured today in Frankfurt-on-Main. It is sold in Western Europe, in Eastern Europe, in the United States and nearly everywhere in the world.

Hydrocyanic gas is highly poisonous and very dangerous. One milligram per kilogram of body weight is sufficient to kill a man. In a closed place it will poison a man in several seconds and will kill him in several minutes. A man can lose consciousness and die by absorbing the gas through the skin.

This gas sticks to surfaces. It sticks not only to the skin and to the mucous membranes to the point of penetrating them, but it also sticks to wood, to plaster, to paint, and to cement, and it penetrates them. In an ordinary place where these materials are encountered, the gas cannot be ventilated after use; it is necessary to be contented with a natural airing-out process, which lasts nearly 24 hours. (source: http://www.ihr.org/jhr/v02/v02p312_Faurisson.html) 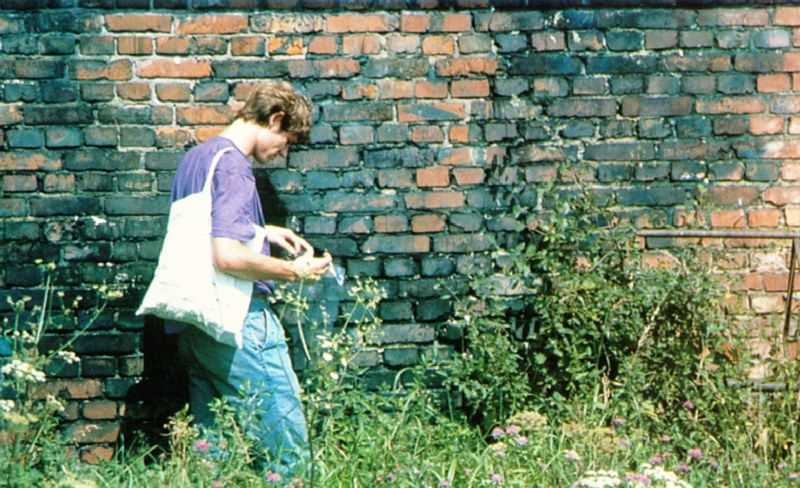 Exterior southwest wall of the Zyklon B disinfestation wing of BW 5b in the Auschwitz-Birkenau camp, with Prussian-blue Zyklon-B seeping through the walls. (More information: http://www.vho.org/GB/Books/trr/6.html) Auschwitz was a farm plantation and industrial city complex of 100,000 workers, and many Polish Jews wore louse-ridden clothing that needed gassing. The fearless scientist-chemist Germar Rudolf, shown above, who just finished a two-and-one-half year prison sentence in Germany for exposing the truth, was once an employee of the famous Max Planck Institute in Germany, in some ways the German equivalent of MIT. Federal forces arrested Rudolf in Chicago and expelled him to Germany -- although he was and is married to an American and had an American child; he had applied for political asylum here and had a perfect case of strictly political persecution; and he had and has committed no crimes under US law. (Fedzilla lies outrageously that Rudolf skipped his own immigration hearing!)

.
Fred Leuchter went to Auschwitz in 1987 -- Leuchter was the leading professional execution consultant in the United States at the time (especially for gassings and hangings) and was featured as 'Doctor Death' on the cover of Esquire magazine.
But Fred -- a gas chamber expert -- found ZERO blue cyanide on the walls, even after millions of people had been gassed there in that very room a few decades earlier.....

Ruined financially for stating his expert opinion, Fred Leuchter ended up driving a senior citizen bus in Massachusetts, but maintains his courageous freedom of speech on the Holofraud.
.
We must find those thieves who stole the "Arbeit macht frei" sign, AND the gas chambers, AND the holes in the ceiling where the Zyklon-B went in AND all traces of blue cyanic acid on the walls.
.
THOSE MASTER THIEVES!
.
But here is a great solution to the problem posed by those terrible revisionists....
.
Let's rebuild the exact Nazi "gas chambers" (with their Zyklon holes and Zyklon blue walls). Yes, rebuild real working gas chambers for mass homicide, exactly as the Nazis made them.....
.
.

At Dachau, the Germans did gas millions -- of LICE and FLEAS in small clothing gas chambers -- THIS IS THE GRAIN OF TRUTH IN THE HOLOCAUST LIES -- and the walls looked BLUE like this. Many Polish Jews the Germans wanted to work were long-haired, greasy, filthy, unshampooed, unwashed, smelly and flea-ridden -- BEFORE they were arrested. (In fact, in his private diary after WWII, US Army general George Patton said that after thinking about smelly Polish Jews he had met several hours earlier he "lost his lunch.") It was essential to cut their hair (just as also with combat soldiers and Marines at the front) to get rid of a loce-and-flea-growth area, and it was vital to kill lice and fleas on their clothing as well so the Polish Jews would not fall sick from lice or flea bites -- and thus escape being put to what they really hated, productive, honest manual WORK.
This gas chamber reconstruction cannot be difficult -- because we have, after all, the original German plans, which Professor Robert Faurisson found in 1976.
.
Of course, these plans by the Bauleitung [construction office] do not specify any homicidal "gas chambers"....BUT we have so many great stories about them by so many Jewish witnesses. Never has a Jew lied! It will be easy to reconstitute exact working replicas!
.
Let us call the man who never speaks falsehood, the Auschwitz witness Elie Wiesel, to authenticate every detail, and the great "Expert on the Holocaust," Serge Klarsfeld and other distinguished Jews.
.
Yes, let us seize on the invitation of Robert Faurisson:

DRAW ME A SKETCH OF A REAL WORKING NAZI GAS CHAMBER. IT MUST BE ABLE TO KILL, NOT INSECTS ON PRISONER CLOTHING, BUT HUNDREDS OF JEWISH HUMANS AT A TIME, VENTILATE THE PLACE, AND MOVE THEM OUT IN MINUTES!

Yes, let's have Holy Wiesel and the Blessed Klarsfeld draw that gas chamber, you know, the one with glass panes in the windows and no bars over them, and with glass doors....which the Jews never broke to get out even while asphyxiating, poor dears.... chambers with no ventilation ducts, and where corpse removers could rush in after ten minutes later, with no gas masks on, while eating sandwiches, and start lugging out the bodies....
.
.
Then we will see Yahweh's miracle!
.

Then we will all believe again in Saint Holoclaus....The Holocaust is the grift that keeps on giving.
.

With this miraculous chamber of the sacred martyrs, the tourists can finally return home from their pilgrimage to Auschwitz and say:

"You know, I saw this with my own two eyes -- the gas chambers in original condition! I saw the introduction of pellets of Zyklon-B through the ceiling! I saw the thick blue cyanide on the death chamber walls!"

That will deliver a sharp smack on the beak to those revisionists -- a real, functioning, Nazi, mass-murdering, Jew-gassing death chamber.
.
Jews, go build it! Take up the Faurissonian challenge! Show the mass-gas death chamber!
.
And remember -- Saint Holoclaus knows if you've been naughty or nice. 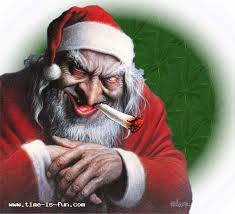 --
NOW AN AMAZON KINDLE BOOK ON YOUR PC, iPHONE OR KINDLE DEVICE

Debating the Holocaust: A New Look at Both Sides By Thomas Dalton

In this remarkable, balanced book, the author skillfully reviews and compares "traditional" and "revisionist" views on the "The Holocaust."

On one side is the traditional, orthodox view -- six million Jewish casualties, gas chambers, cremation ovens, mass graves, and thousands of witnesses. On the other is the view of a small band of skeptical writers and researchers, often unfairly labeled "deniers," who contend that the public has been gravely misled about this emotion-laden chapter of history.

The author establishes that the arguments and findings of revisionist scholars are substantive, and deserve serious consideration. He points out, for example, that even the eminent Jewish Holocaust scholar Raul Hilberg acknowledged that there was no budget, plan or order by Hitler for a World War II program to exterminate Europe's Jews.

This book is especially relevant right now, as "Holocaust deniers" are routinely and harshly punished for their "blasphemy," and as growing numbers of people regard the standard, Hollywoodized "Holocaust" narrative with mounting suspicion and distrust.

The author of this book, who writes under the pen name of "Thomas Dalton," is an American scholar who holds a doctoral degree from a major US university.

This is no peripheral debate between arcane views of some obscure aspect of twentieth century history. Instead, this is a clash with profound social-political implications regarding freedom of speech and press, the manipulation of public opinion, how our cultural life is shaped, and how power is wielded in our society.