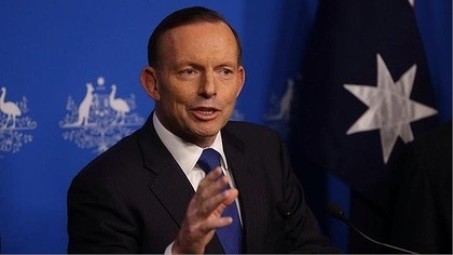 Australian Prime Minister John Abbott
In the face of a coordinated and sustained campaign initiated and led by Jewish activists, the Australian Prime Minister Tony Abbott has abandoned his 2013 election promise to water down or remove Section 18C of Australia’s Racial Discrimination Act which makes it unlawful to act in a manner likely to “offend, insult, humiliate or intimidate” someone on the basis of race. Abbott said he had made a “leadership decision” to walk away from his pledge despite having promised to remove this outrageous restriction on the free speech after the law was used successfully against conservative columnist Andrew Bolt in 2011. It is a measure of the power wielded by organized Jewry in Australia that the Prime Minister would rather damage his political credibility by breaking a clear election promise than suffer the consequences of defying the single most powerful group in Australian society. Abbott, who made the announcement while outlining an extension of anti-terrorism laws, attempted to justify his broken promise by claiming “I don’t want to do anything that puts our national unity at risk at this time and so those proposals are now off the table.” Abbott’s apparent desire to not further alienate Australia’s problematic Islamic community by repealing Section 18C (at a time when the government is set to strengthen laws against terrorism) is an obvious political smokescreen. The veteran Jewish journalist, Michael Gawenda, writing in the Business Spectator, identified the real reason behind the Prime Minister walking away from his election commitment:

While Abbott said that the decision to ditch the plan to rid the Racial Discrimination Act of section 18C was taken because of “complications” in dealing with Islamic communities in the context of the proposed tough new terrorism laws, it seems likely that more was involved in this decision. The conflict in Gaza and the coverage and reaction to this appalling, heartbreaking conflagration, in my opinion, made it virtually certain that any move to change or abolish section 18C would extract too high a political price. The repeal of section 18C was vigorously opposed by the leadership of virtually every ethnic community in the country. But it would be fair to say — without wishing to give succor to those who reckon the Jews are too powerful — that Jewish community leaders have played a crucial role in organizing the opposition to any potential change to the RDA.  It is the opposition of the Jewish communal leaders that had been of major concern to [Attorney General] Brandis and, to a significant extent, Tony Abbott.

Gawenda notes that the Jewish community’s overwhelming support for Section 18C (which was itself originally the legislative result of submissions by organized Jewry to the National Inquiry into Racist Violence and the Royal Commission into Aboriginal Deaths in Custody in 1995) is linked to the broader Jewish commitment to “multiculturalism” in Australia.

Gawenda is disingenuous in claiming that the source of the Jewish community’s power in this debate resides in its being a “role model for successful multiculturalism” rather than in its status as a group with the kind of financial, political and media clout to instil genuine fear in those who oppose its interests. As in the United States, Jewish money exerts a dominating influence over Australian politics, which guarantees that most politicians are willing to put the Australian Defense Forces (and Australian taxpayers) to the service of an ethno-nationalist state in which Australia has no economic or strategic interest. The Jewish academic and activist Dan Goldberg acknowledges that: “The annual report of the Australian Electoral Commission always includes Jewish names and Jewish-owned companies donating large sums to both sides of politics.”[i] The sway held by organized Jewry over Australia’s political leaders was highlighted earlier this year when the former Foreign Minister Bob Carr hit out at the “pro-Israel lobby in Melbourne,” saying it wielded “extraordinary influence” on Australia’s foreign policy during his time in former Prime Minister Julia Gillard’s cabinet.Asked how the lobby achieved this influence he said: “I think party donations and a program of giving trips to MPs and journalists to Israel. But that’s not to condemn them. I mean, other interest groups do the same thing. But it needs to be highlighted because I think it reached a very unhealthy level.” Carr’s observations were later corroborated by the former Australian Prime MinisterMalcolm Fraser who said Carr was “absolutely correct” in his view that the Jewish lobby wielded too much power. Gawenda asserts that, unlike the vast majority of Australian Jews, he was originally in favor of the proposal to water down Section 18C of the Act until recent events gave him pause for thought: in particular the widespread criticism of Israel and its supporters for their attempts to justify the appalling massacre of Palestinian civilians in Gaza:

But here’s the thing. I believe that in recent days, in the light of what has been published about Jews and the conflict in Gaza, the clearly anti-Semitic cartoon in the Sydney Morning Herald, for instance — for which the SMH has issued an apology in an editorial that I found unsatisfactory —\ not to mention the astounding amount of outright racist filth to be found on social media, it may no longer be the case that we can trust editors and executive producers when it comes to ensuring that what amounts to vilification is not given any room in mainstream commentary and analysis.

So, for Gawenda, the recent (and entirely legitimate) criticism of the actions of the ethno-nationalist state of Israel and its Zionist cheerleaders in the West only serves to confirm that Jewish leaders were right to oppose any changes to Section 18C. The criticism of the Israeli government and those who would defend its barbarity in Gaza simply confirms for Gawenda that Australians cannot be trusted with unfettered free speech. Incidentally, the supposedly “anti-Semitic” cartoon in the Sydney Morning Herald to which he refers is less an anti-Semitic caricature and more an accurate representation of actual events — of Israeli citizens sitting outside to watch and cheer the bombing of the helpless Palestinian civilians as entertainment. 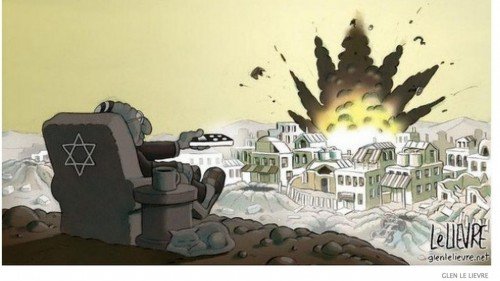 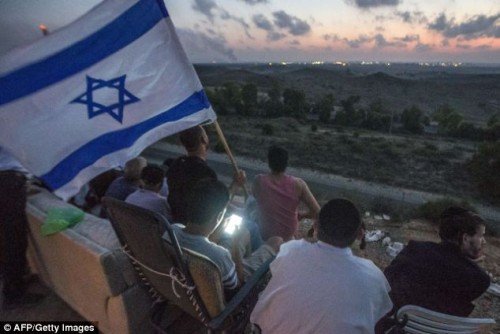 An “anti-Semitic” photograph?
Likewise, for the Australian Jewish academic and activist Danny Ben-Moshe, the slaughter in Gaza “has led to the crossing of new anti-Semitic thresholds with the potential to take us down a dangerous path. It is a path not laid with guns and bullets, but with loose and manipulative language.”  According to Gawenda, it was the sudden outbreak of truth-telling about Israel and the dishonesty of its apologists that reinvigorated the campaign by Australian Jewish leaders to oppose any changes to Section 18C of the Racial Discrimination Act:

It is this that made Jewish community leaders more determined than ever to oppose any change to section 18C of the Racial Discrimination Act. And in the main, Jews in Australia support the communal leadership on this issue. No one can doubt that there has been an alarming rise in anti-Semitism in Europe, something that is hardly reported in most of the Australian media. Jews feel under threat — in some cases physical threat — in France and Belgium and Germany and even in England. Not to mention Hungary, where an openly anti-Semitic party has garnered significant support. Thousands of French Jews have left France for Israel and other places. The numbers leaving every month are growing.Though there has not been a similar rise in virulent anti-Semitism in Australia, Jews in Australia nevertheless have good reason to believe that if the virus of anti-Semitism is spreading in Europe, it might one day reach these shores. In this environment, Tony Abbott decided that the plan to change section 18C, a solemn promise he had made to Bolt and to his supporters at the Institute of Public Affairs had to be abandoned. Will there be a better political time to resurrect these proposed changes? Almost certainly not.

Note the standard pathologization of anti-Jewish sentiment as a “virus” that has nothing whatever to do with Jewish behavior. On the other hand, the reflexive Jewish hostility toward Europeans (which has led to the demographic transformation of Western nations over the last few decades) is apparently not a virus, but stems, rather, from some highly developed sense of fairness and universal brotherhood that is inherent in all Jews. Of course, what Gawenda won’t acknowledge is that the only reason Jews are increasingly subject to anti-Semitic attacks in countries like France and England is because of mass non-White (particularly Muslim) immigration and multiculturalism — both of which are the malignant outgrowths of Jewish ethnic activism. A disappointedAndrew Bolt observed that Jewish leaders would ultimately regret opposing changes to the Act, noting that: “The Jewish leaders now should look very, very deeply into their souls at what they have helped wrought and ask themselves, are you seriously safer now as a result?” Bolt’s reasoning is that under Section 18C Australian Jews will in future be precluded from criticizing the beliefs and actions of a growing and increasingly militant Australian Islamic community which will be increasingly hostile to Israel and the interests of Australian Jews. As with Gawenda, Bolt fails to mention that the only reason there are any Muslims in Australia at all (with all their myriad problems and social dysfunctions) is because Jewish activism succeeded in ending the White Australia policy and establishing multiculturalism as the basis for social policy in Australia. As The Jewish academic Dan Goldberg proudly acknowledges: “In addition to their activism on Aboriginal issues, Jews were instrumental in leading the crusade against the White Australia policy, a series of laws from 1901 to 1973 that restricted non-White immigration to Australia.” It is clear that the Jewish fear and loathing of White Australia trumps any concern about the anti-Semitic tendencies among non-White immigrants that are being imported into the nation. The Jewish writer Peta Jones-Pellach is not alone in expressing the view that Australian Jews should always back the Muslim minority in any conflict with White Australia, arguing that “We recognize that our ongoing harmonious acceptance into the Australian community depends on forging bonds with the increasing numbers of non-Jewish Australians who might be our theological opponents or even our enemies.”[ii] The supposed benefits to Australian Jewry that multiculturalism has bestowed – most notably the diminished threat of the emergence of a mass movement of anti-Semitism from White Australians — is seen as having far outweighed any negative effects of large scale Islamic immigration such as the fact that: “Some Australian Jews fear that migrants arriving from Muslim countries will contribute to anti-Semitic currents in Australia, inflame extremist groups and pose a threat to the relative peace they currently enjoy.”[iii] The rise of Islamic anti-Semitism in the West reveals a paradoxical element of the overwhelming Jewish support for multiculturalism; an element which resulted in the emergence and growth of neoconservatism. Kevin MacDonald notes that: “Although multiculturalist ideology was invented by Jewish intellectuals to rationalize the continuation of separatism and minority-group ethnocentrism in a modern Western state, several of the recent instantiations of multiculturalism may eventually produce a monster with negative consequences for Judaism.”[iv] Australian Jewish activists like Dan Goldberg recognize the danger, and he notes that:

Herein lies an underlying tension that exists in the psyche of Australian Jews in the new millennium: on the one hand understanding the fundamental wrong in tarring all Muslims with the same extremist brush; on the other hand feeling great unease in showing support for Muslims, some of whose brothers are waging jihad against Israel and the Jews. … Many Australian Jews are therefore caught between these tides, ostensibly supportive of minority rights but cognizant of the fact that among the Muslim community are radical elements who seek our destruction. [v]

Posted by Michael Santomauro at 8:24 PM