Judenrat, Jews themselves who were responsible for their "holocaust"

From: JoRiz@aol.com
Date: September 13, 2011 11:05:35 PM EDT
Subject: Judenrat, Jews themselves who were responsible for their "holocaust"

Jews who helped in their own "holocaust".

a Jewish council created under German orders which was responsible for internal matters in a ghetto.

It was required to provide Jews for forced labor and to collect valuables to pay collective fines imposed by the Germans. The members of the Judenrat believed that by complying with German demands that could ameliorate the harsh realities of German administration. Frequently, they were able to set up hospitals and soup kitchens and to try to meet basic sanitary needs in the ghetto.

In the beginning the members tried to resist German pressure. However, as time went on, the Judenrat was forced to deliver Jews to the deportation trains that were bringing them to their deaths. Under pressure many members of the Judenrat cooperated with the Germans. However, there were many cases of resistance, of resignation, of support for the partisans, and of committing suicide rather than bending to German pressure. 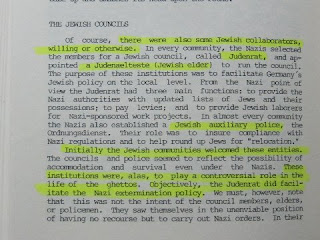 Posted by Michael Santomauro at 8:40 PM